Albert Frigg, veteran of the 43rd British (Wessex) Infantry Division is 93 years old but still very active. In 2000 he was the motor behind erection of a monument for the British tank crews that lost their lives on Hill 112 in Normandy France.

The monument became a reality and restored Churchill tank is now a permanent reminder of the fierce battle that was fought in that area in 1944.

After successfully raising money to purchase and restore a ww2 Churchill tank and placing it on Hill 112 in 1999 traffic to the hill has increased. That is why it is necessary to build a new road towards the hill.

Albert Figg about his new mission:
The little known battle operations Epson/&Jupiter started June 25th 1944, and carried on until mid August [apprx 50 days] involving some 70,000 men, many hundreds of Tanks, and Guns, etc. this was the start of the breakout in Normandy, during that time, thousands of men were killed or wounded, My Division 43rd Wessex, lost 7000 2000 killed, and 5000 wounded. In 12 days. The battle was no doubt the corner stone fore eventual victory in Europe.

I feel that time has come to commemorate all those who served in the front line, eye to eye, nose to nose with the enemy, and at the end of the day, they were the men who suffered most in battle and, the real hero's, the infantry, [known as the foot sloggers], Signalers, Forward observation men, Stretcher bearers, Medecal orderlies etc.

It is to these men I hope, with your support to plant 112 tree's to form a Avenue of Remembrance as a Living Memorial to all those who made the supreme sacrifice and gave us the freedom we have today.
The Trees should be planted to correspond with the 70th Anniversary in 2014 on the D-day Landing, June 6th 1944.

They should form a impressive entrane to the memorial site, situated on the Hill just above Esquay Notre Dame. It is hope that signs indicating to Hill 112 will be erected during the buidling of the new road.

How can you help?
You can donate by going to the website www.hill112.com and click on the donate button.

Albert Figg was a sergeant in the Royal Field artillery. He joined the Swindon Territorial Army at age 18 in 1939. He was with the 43rd division and landed on Gold Beach in Normandy on June 24th. He was with the division when it fought in the hedgerows of Normandy and after the outbreak in the advance through France, Belgium. The division was in another major battle as it advanced into Holland as part of operation Market Garden, the combined ground and airborne attack in september 1944. That campaign ended unsuccesfull. Later in march 1945 another advance let them again into Holland, liberating cities like Hengelo and from there it advanced into Germany towards Bremen. 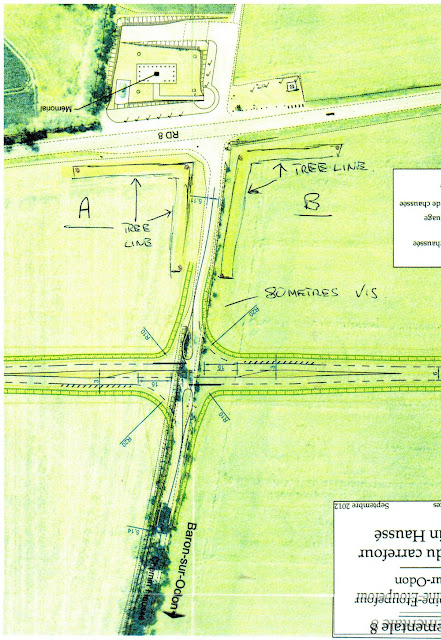